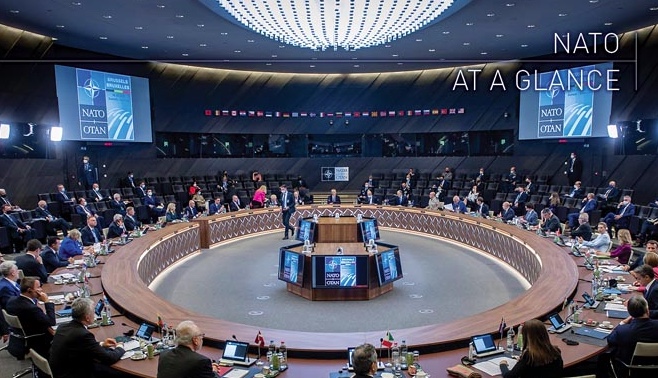 The Secretary General’s Annual Report 2021 – Europe and North America United and Stronger Together in Turbulent Times. In a more dangerous and competitive world, NATO continues to do whatever is necessary to keep our people, nations and values safe.

Over the past year, Russia’s aggressive rhetoric and actions have continued apace, culminating in the brutal and unprovoked invasion of Ukraine in late February 2022. President Putin has been clear that his objectives are not limited to Ukraine. He has demanded legally binding agreements to end further NATO enlargement, and to remove troops and infrastructure from NATO Allies that joined after 1997 — almost half of the Alliance. For the first time ever, in an agreement signed between Russia and China in early February 2022, Beijing has sided with Moscow in calling on NATO to stop admitting new members.

As this report goes to print, President Putin’s war in Ukraine — enabled by Belarus — still rages, killing innocent civilians, destroying cities and infrastructure and causing millions to flee the country. In response, NATO Allies continue to step up support for Ukraine, impose economic costs on Russia, and bolster our deterrence and defence. In recent weeks, we have more than doubled our military presence in the eastern part of the Alliance, with more troops, aircraft and ships, to protect and defend every inch of Allied territory.

We have entered a new era in global security, where authoritarian powers, like Russia and China, are openly contesting core principles for our security, and seeking to re-write the entire international order on which our peace and prosperity depend. Moscow is using force to pursue its objectives. At the same time, other challenges to our security have not gone away, including terrorism, nuclear proliferation, cyber attacks, disruptive technologies and climate change.

Faced with this new reality, Europe and North America must continue to stand united and work closely together in a strong NATO. This is exactly what we are doing. At our Brussels Summit in June 2021, we agreed an ambitious and forward-looking NATO 2030 agenda. In this report, you will read about the concrete actions NATO has taken to adapt our Alliance politically and militarily to an ever-changing world.

NATO at a Glance
Together, NATO Allies represent one billion people and roughly half of the world’s economic and military might.

Why Was NATO Founded?
The North Atlantic Treaty Organization was founded in 1949 in the aftermath of the Second World War. Its essential purpose is to safeguard the freedom and security of all its members by political and military means. The principle of collective defence is at the very heart of NATO’s founding document — the North Atlantic Treaty. This principle, enshrined in Article 5 of the Treaty, binds NATO Allies together, committing them to protect each other against attack. NATO strives to secure a lasting peace in Europe, based on common values of democracy, individual liberty and the rule of law.

How Many Member States Are There?
The Alliance started with 12 founding members: Belgium, Canada, Denmark, France, Iceland, Italy, Luxembourg, the Netherlands, Norway, Portugal, the United Kingdom and the United States. The North Atlantic Treaty allows other European states to join the Alliance, as long as all existing Allies agree. Any prospective member must share NATO’s core values and have the capacity and willingness to contribute to security in the Euro-Atlantic area. Over the decades, the following 18 countries have joined NATO: Greece and Turkey (1952), Germany (1955), Spain (1982), the Czech Republic, Hungary and Poland (1999), Bulgaria, Estonia, Latvia, Lithuania, Romania, Slovakia, and Slovenia (2004), Albania and Croatia (2009), Montenegro (2017) and North Macedonia (2020). All 30 NATO Allies are stronger and safer together than they would be alone.

Preparing for the Future: NATO 2030
NATO 2030 is an ambitious initiative, led by Secretary General Jens Stoltenberg, to make sure NATO remains ready, strong and united for a new era of increased global competition.

Throughout 2020 and 2021, the Secretary General consulted widely with Allies on how to make NATO even stronger and better prepared for the future. He also received valuable input from an independent group of experts1. In addition, the Secretary General engaged with civil society, young people, parliamentarians and the private sector to gather ideas that ultimately helped shape the NATO 2030 agenda.

NATO Allies endorsed this agenda at the Brussels Summit on 14 June 2021. It consists of eight key proposals.

Deterrence, Defence and Dialogue
NATO faces the most complex security environment since the end of the Cold War. In response, the Alliance has engaged in its biggest adaptation in a generation — increasing investments, modernising capabilities and investing in higher force readiness.

In 2021, Allies took further steps to ensure that the right forces are in the right place at the right time, including by continuing to invest in readiness and in the Alliance’s rapid response capability. NATO has further implemented its Readiness Initiative, agreed in 2018. Designed to strengthen the culture of readiness within the Alliance and help provide forces within 30 days or less, the initiative also helps ensure that the Alliance is able to respond on short notice and quickly reinforce national forces on land, in the air and at sea — be it for crisis intervention or high-intensity warfighting. At the Brussels Summit in June 2021, Allies also agreed to further strengthen and modernise the NATO Force Structure — encompassing the national and multinational forces available to NATO — to meet current and future deterrence and defence needs.

Investing in Defence
The threats and security challenges that led to the adoption of the Defence Investment Pledge in 2014 have not subsided. Indeed, they have multiplied and intensified. By investing in defence, NATO Allies continue to develop, acquire and maintain the forces and capabilities required to ensure the Alliance’s security in this challenging and unpredictable environment.

For seven consecutive years, European Allies and Canada have increased defence spending. From 2020 to 2021, defence spending increased by 3.1% in real terms. In total, over the last seven years, this increase added USD 270 billion for defence.

In 2021, eight Allies met the guideline of spending 2% of their GDP on defence, up from just three Allies in 2014. The United States accounted for 51% of the Allies’ combined GDP and 69% of combined defence expenditure. Total NATO military spending in 2021 was estimated to exceed USD 1 trillion.

Engaging with Citizens, Building Awareness
Citizens who understand and support NATO’s mission are vital to the Alliance’s continued success. Keeping citizens in Allied countries and around the world informed is, therefore, a large part of the Alliance’s vigorous communications and public diplomacy engagement.

NATO is continually reaching out to audiences — both existing and new — with information and news about what NATO is, what it is doing and why it is important. In addition, given today’s information environment, NATO works hard to counter hostile information — including disinformation — with fact-based, credible public communications.

Since its founding in 1949, NATO has been able to adapt to changing security challenges. In 2021, as the security environment grew more complex, NATO modernised its military structures and capabilities, accelerated innovation and stepped up efforts to address the impact of climate change on security.

Promoting Peace
To keep its people safe and protect its fundamental values — democracy, individual liberty and the rule of law — NATO engages in operations and missions beyond its borders, and cooperates with a range of partner organisations and countries near and far.

Working closely together, NATO and its partners can better uphold the rules-based international order, defend common values and interests and tackle global challenges, including terrorism.

The current policy, adopted in 2018, is built on three pillars: integration, inclusiveness and integrity. NATO recognises the disproportionate impact of conflict on women and the importance of their contributions to discussions and decisions around peace and security. NATO’s approach is characterised by questioning assumptions about the security status quo and applying a gender lens to all that NATO does in the pursuit of equitable peace and stability.

NATO Headquarters in Brussels houses the Alliance’s International Staff and International Military Staff, along with 30 Allied delegations and military representations, 18 partner missions and staff from several NATO agencies. It is the central forum for the discussions and consultations that shape NATO policy and practice.